In The News And Media Coverage


Check out the latest news stories and featured reviews about Andy Niekamp and Outdoor Adventure Connection. 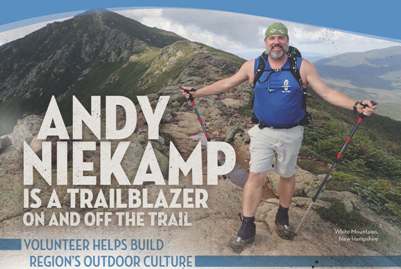 
How to enjoy the great outdoors on a cold-day
Dayton Daily News - December 4, 2020


Using trails? Be sure to leave them as nice as you found them
Dayton Daily News - April 10, 2020


Weather outside frightful? The outdoors can still be delightful
Dayton Daily News - December 13, 2019


This Florida Thru-Hike Is Not for the Faint of Heart. The 1,300-mile Florida National Scenic Trail just might be the hardest hike you've never heard of.
Outside Magazine - July 10, 2019


Muddy spring hike? Go through the puddles, not around them.
Dayton Daily News - April 6, 2018


Ohio author to give a presentation on Ohio’s Buckeye Trail
Times Bulletin - April 2, 2018


Sorry these outdoor adventures are just for the ladies.
Dayton Daily News - August 25, 2017


Andy Niekamp is a Trailblazer On and Off the Trail.
Five Rivers MetroParks - 2017 Winter/Sring Parkways Magazine


Hiker to give presentation in Minster.
Sidney Daily News - November 4, 2016


What you may not know about the Buckeye Trail
Dayton Daily News - January 12, 2016

I loved having the park staff involved and our group breakfasts. – Karen K.